Up until now, life was pretty hectic.  I hurriedly prepared and installed field gear to initiate this winter’s research project.  I bought some new clothes and gear for my trip (my new Mountain Hardware rain jacket is the red one that I am wearing throughout this trip.)  I also wanted to hang out with my friends which I wouldn’t see for the next couple of months due to our combined travel schedules and up and coming holiday breaks.

I arrived at the airport in Fairbanks, Alaska at midnight and flew 3.5 hours to Seattle and 1.5 hours to Los Angeles.  Now I needed to get to Riverside, so that I could  hang out with an old friend of mine, Sarah, for 24 hours before flying to Japan the next morning. I jumped on the FlyAway shuttle bus ($7) between LAX and Union Station (a transfer point for all public transit in the LA area).  Purchased a round trip train ticket ($23.50) on the MetroLink to get me there.
En route, my fellow passengers taught me new phrases as they audibly imposed upon my personal envelope.  “Jail-raised” was the most notable.  As in, “That m_th*rf_ck*r wasn’t jail-raised so he don’t know sh!t.”  Apparently, this guy had been jail-raised and implied that he held qualifications that far exceeded his subject’s because of his time spent behind bars.  I was particularly impressed by this group of 5 passengers, each of whom was equally impressed with each other because of their particular experiences behind bars and the homies that they had met while there.  It was funny that one of them was trying to fit in and was sure to claim that while she had not been in jail yet, she was soon going to go to court for some minor infraction in which she had received a ticket. She thought that this might just be her opportunity to finally end up in the county jail.  The ages of these kids?  17, 19, 20, 24, & 18.

Sarah picked me up at the train station and gave us an opportunity to catch up a bit.  Nine years had passed since we last saw each other.  It had probably been 5 years since we last talked, but then there was Facebook.  Of course, through the “magic” of this website, we have reconnected in some minor, but not really so minor way.  Its an interesting phenomenon because I’m not sure that I would be sitting with her and her husband at dinner, if we had not been Facebook friends.  I highly doubt it actually.  It hadn’t dawned on me that Riverside was somewhat near LAX when I had posted that I’d have 26 hours in the LAX area and was dreading the experience.  Sarah invited me to stay with them in their home so that we could catch up and share a few laughs. Laugh, share memories, and catch-up we did.  We went on a great little hike up to the “C” and had a great homemade pasta dinner and some beautiful and delicious little appetizers and a wonderfully simple, yet indulgent, chocolate-laden dessert.  I am so happy that we were able to make that happen.  It had been way too long and I hope that it won’t be nearly so long before I see them again!
The next morning, I caught the train back to Union Station, but caught the subway ($3) to the airport.  Red line to the Blue line to the Green line.  Free shuttle bus to the airport and I was there.  1.5 hours for the train and 1.25 hours for the subway/shuttle. 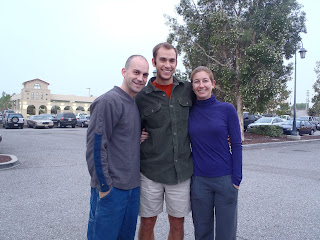 12 hours after Los Angeles and I touched down in Tokyo.  Pick-up my checked luggage. Go through customs. Check in for my domestic flight.  Go through security.  They find an old generic leatherman (with knife) in my carry-on!  I haven’t seen this thing in many, many months!  How long had it been in there?  This is the bag that I always have with me as my carry-on.  It had gone through security without question from Alaska to LAX and again from LAX to Japan!  I suspect that it had traveled on a number of flights before this trip as well.  Interesting.  Throw it out please.  They comply.

Sapporo.  Oct. 22, 2011. 9:30 PM.  Subway to Sapporo Station. Taxi to Hokkaido University’s International House (male dormitory).  Check in. Sign papers.  Listen to the many rules. Agree. Sign my life away. Go to sleep.  It has been a very long trip from Alaska and I am going to sleep very, very hard.