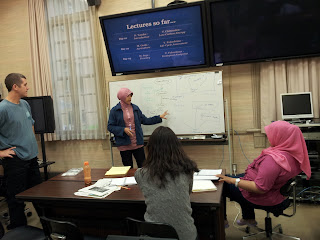 Today, Tony led a few activities that encouraged the students to summarize the material in the course to date.  It was somewhat helpful and was interesting to see and hear how different people interpret the lectures.  The first exercise was for us to draw a mental map of the course materials to date.  The second exercise was for us to identify and briefly discuss an issue important to sustainability in our home regions/countries.  I discussed corporate vs. subsistence salmon harvests in the rivers of Alaska.  I also discussed how the U.S. economy is bolstered by the countries of China and Japan when they purchase large quantities of U.S. debt.  The result is that Americans have a false sense of economic security, a sense of entitlement to purchase materials derived from resources that have been extracted from seemingly poorer nations.  When in fact, our society would collapse almost instantaneously if either country called our debts.  The messed up thing is that the entire global economy would collapse, but both China or Japan have the power to instigate these types of global impacts due to the economics of the situation.  Anyhow, I believe that if this situation did not exist, resource extraction from developing nations would be much less severe than it is now. 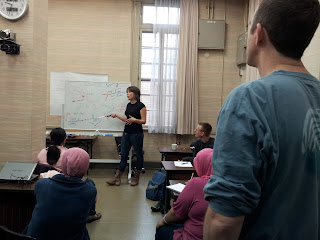 The second lecture was by Dr. Arai.  This was the first time that we have met him and he discussed Japanese and global policies and history related to resilience and disasters, including the disaster caused by the Great East Earthquake in Japan in March 2011 (and subsequent tsunami and nuclear disaster).  It was an interesting lecture, but it would have been nice to have more time for discussion and questions.