This is an old film produced by the USGS (and linked from their website) that shows footage of 1923 Colorado River river trip to assess hydropower potential of Grand Canyon (1923).  This is a silent video produced in black and white that shows the excitement of the river trip and some of the trials and tribulations of these early adventurous public servants of the U.S. federal government.

Additional information can be found at this link to the USGS’s archival material. 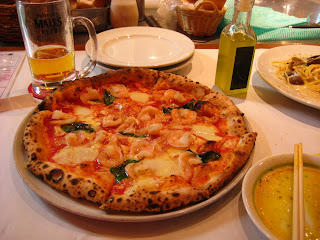 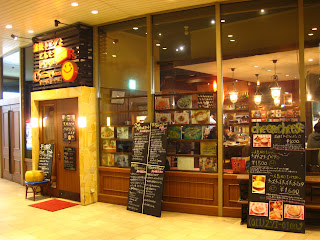 Wow!  I had some amazing Italian food last night!  Some of the best that I have ever had and I really am looking forward to going back and trying some more…  I know that you won’t believe me, but you might want to trust me on this one.  The name of the restaurant?  Cheese, cheese.  Yes, that was the name!  So let me repeat myself, the name of an amazing Italian restaurant in Sapporo, Japan is “Cheese, cheese”.  Where is it?  Well, its in the Susukino District on the bottom floor of the Norbesa Building, which is similar to most in Susukino, except that it has a giant ferris wheel on top of it!  Seriously, you can’t miss the ferris wheel and therefore, Cheese, Cheese is very easy to find. 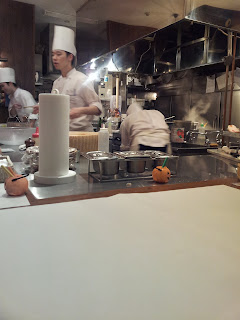 Now, I speak and read absolutely no Japanese so there is always a language barrier when I go to a restaurant, but the experience turned out pretty good. I sat at the bar that surrounds the kitchen which was great.  I noticed that every patron was being served something as a precursor to their meal.  I wasn’t quite sure what it was until mine was sat before me.  It was a fried egg in a cup. I was directed by the chef to immediately stir up the egg and eat it rather than let it cool.  So I did. It was nothing spectacular, but interesting.  Otherwise,  I had only pizza while I was there.  I had their Margherita variety, which I tend to really enjoy.  The menu was only in Japanese and it had some photos, but mostly, I just said “Pizza”.  I also said “Tomato, basil, cheese” (with my best Japanese pronunciation) and the waitress said “Ah, Margherita!”  And I said “Yes!”.  The pizza was a thin crust version that was about 12″ in diameter.  They only have one size, I think. 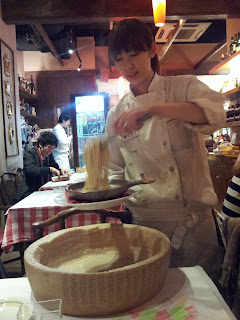 While I was there, I watched the chef make a pasta that appeared to be alfredo, but it looked absolutely amazing.  I watched as he tossed the noodles in the center of a giant hollowed-out wheel of parmesan cheese.  Whoah!  He tossed and tossed and tossed the hot noodles in the cheese wheel.  I can only imagine how the noodles became coated in a layer of parmesan which he then dropped into a creamy serving dish.  It looked delicious.  Next time, I will try that!  And I will be back, and I doubt that it will be too awfully long before I am there! 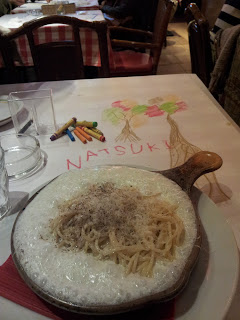 I also watched the chef as he brought out a new leg of prosciutto, which he placed into a clamping device.  He sat it in front of a customer that had ordered some sort of appetizer and he proceeded to carve very thin slices of prosciutto for them.  He appeared to be telling them a story in Japanese as he slowly sliced and served them slices of the meat.  I was really curious to hear what he had to say, but I couldn’t understand a word of it.  It seemed like he might be telling them about the history of prosciutto and the secret life meanings that can be found by taking it in slowly on an autumn Saturday night.  It was moderately priced, as I had 1/2 of a pizza and a drink for about $18.  I could handle that, but it wouldn’t be enough had I been a little bit hungrier. 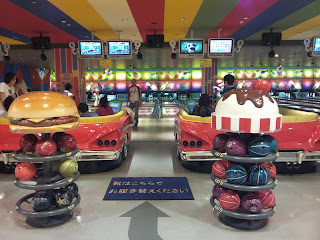 Also inside of the building with the ferris wheel, was a looked to be a fun bowling alley.  Complete with many cartoonish characters and lovely servers.  I think I found a fun evening for our little group of international students.  Dinner and drinks at Cheese, cheese; followed by a round of bowling; and finished with a 20 minute ride on the big ferris wheel (1000 Yen/ person). 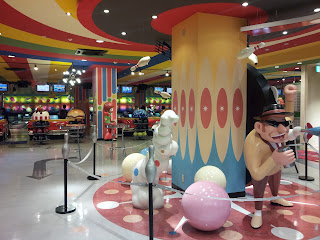 Update:  I went back to Cheese, Cheese to try this amazing pasta alfredo dish that I had seen from across the distance while I was there the first time.  I went alone and I only ordered the Pasta Cheese, Cheese (which is what they referred to this dish at a cost of 1800 yen). Natsuki’s (my waitress) masterpiece shall be my dinner! First, piping hot noodles are repeatedly tossed in a hollowed wheel of Parmesan cheese. Then, place noodles back onto hot plate and pour near boiling heavy cream over the piping hot noodles. Top with grated Romano… Let your mouth water as you ponder the flavor. If it were me, I would add some steamed broccoli and maybe a touch of basil, oregano, and thyme. Delicious. 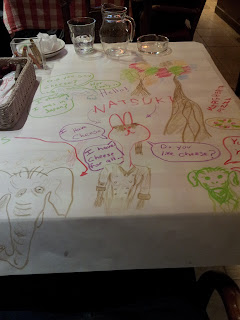 And below you can see my artistic creation that evolved out of the rabbit and name that Natsuki wrote onto my paper table covering upside down as I she sat me.  Fun, fun at cheese, cheese!… 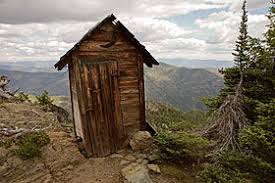 In the time of our ancestors, it seemed mind-blowing when somebody started digging a hole before doing his/her business to realize several benefits: 1) Sanitation.  It was cleaner and you were less likely to get sick if you crapped into a hole in the ground and covered it up. 2) Odor control. With a little earthen cover, the eau de feces is much more pleasant. 3) Compost.  The whole mess even seems to go away if you just give it a few months under ground, so you can dig in that same spot once again and do your thing.

Then we decided to upgrade as we dug bigger holes over which we would place platforms unto which our buttocks would sit.  Technological advancement, but we lost some of the benefits of the simple hole covered in dirt.  Lets face it, this is an outhouse.  Many, if not most of my friends in Alaska, actually still use outhouses today because they live in cabins without running water.  1) Outhouses can be clean, but many don’t feel that way.  At least almost all of the stuff, ends up in the hole!  2) Odor control.  Yeah, you wish.  3) Composting?  Well kind of…  Maybe eventually when you bury that big festering pile of stuff, but I bet that you’ll never be brave enough to dig there again! 4) Water conservation!  Well that’s the reason that outhouses exist these days right?  They are typically found in areas that lack running water. 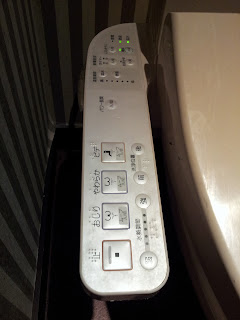 Sure there were various renditions on the outhouse, such as the “head” on historical sailing vessels that traversed the seas of the planet.  Historically, the head for the common sailor was found at the front or rear of the ship, where holes were strategically placed over  the water into which a man (or woman) could do her business.  Now, that was clean.  There was no odor.  It was all recycled by the sea and it required no water!  Not to mention that the impact in the open sea was either beneficial or nominal due to the vast volume and extent of the world’s seas.  What is it that is said about the world’s pollution problem?  The solution to pollution is dilution.

** This is contrast to the current situation where to worlds’ oceans have become a dumping ground for ships and nations world wide.  Our seas are drowning in plastic, toxic waste, and garbage.  Our food and livelihood comes from these waters people!  Once you devastate them, they are not going to be restored very easily!

Then came chamber pots and servants to dispose of them.  It was probably dumped into a nearby river, sea, or hole that would be filled until it was at capacity.

Then came water consuming toilets which eventually would evolve into the toilets that are commonplace in United States households. And then there are variations on those to conserve water (which is great), with low flow toilets, dual volume flushes (depending upon what type of business you have done). Please note that I do not want to suggest that these are the height of the recent evolution of toilets, because there are obviously several evolutionary tracks that toilets have taken.  In places around the world, they use holes in the floor that still utilize water to move the waste from the bathroom into the public sewer system or into a septic system (Italy, India, Japan, and China are places that I have encountered such systems). 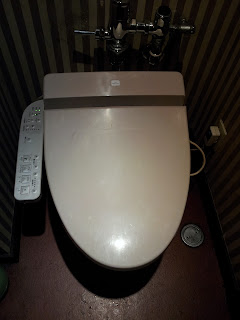 Well, the Japanese have decided to push the envelope in terms of toilet innovation.  *Cue the bugles!* Enter the Washlet (by Toto). Its more than just a toilet seat, folks!  It is a Bum Pampering Appliance Extraordinaire!  Not only does it chop, mash, dice, and cube your favorite veggies (okay, not really), but its various forms will have many, if not most, of the following options:

Yes folks, we are talking EVOLUTION!  I introduce unto you, the Washlet by Toto!…

Interesting…  This afternoon, I discovered an underground passage (it could also be classified as a shopping mall) that links the Sapporo Station to the Odori Station to the  Susukino Station.  I walked the length of it and was pretty amazed by the underground maze that links all of these areas.  Under, above and around each station are underground shopping areas that emerge and stand up out of the earth to form malls that extend in all directions.  Up, down, and all around.  They are also not simple and easily followed.  The passages lead off in angles in every direction and those link to other ones and those to more.  I felt like a rat in an experiment!  It made me think about the potential consequences of a major earthquake.  What would happen if there was an earthquake at this precise moment when I am underground and have no idea how to get out of here.  Do I even recognize the exit signs?  Not really.  I definitely know what some of them look like, but there do not always seem to be exit signs when there are paths to the surface.  Basically, I think that I would be screwed.  If there is an earthquake right now, I’ll just lay beneath the rubble and hope that I can crawl through the endless passages until I see light at the end of the tunnel.  But until there is an earthquake, I will just start walking a little faster and get myself out of  here!  I don’t even like shopping malls! But this one is kind of interesting…  😉…